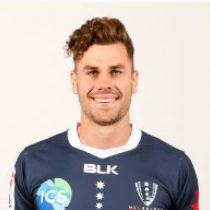 Being recruited as a specialist 13, Tom’s brute size and athleticism is a rare mix for centres in current Australian playing ranks.

With great performances in the Australian Sevens program, he continued to improve with his first professional Super Rugby environment.

The former Waverly College student was unable to get on the field for the majority of 2012, courtesy of an injury suffered playing for the Australian Sevens side, as well as a serious knee injury from the Shute Shield.

Although progressing cautiously, his recovery period, fortunately, saw English available for selection in 2013, where he showed a great return on the Rebels faith.

In 2018, English was announced as the Rebels' Captain and cemented himself as the side's first-choice outside centre under new Head Coach Dave Wessels.