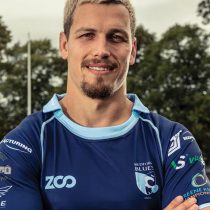 A former national representative at New Zealand U19 and U20 level, when he played alongside All Blacks Aaron Smith, Sam Whitelock and Zac Guildford, in 2007 he made his NPC debut at just 19 years of age, playing for Auckland and then North Harbour.

He went on to play Super Rugby for the Blues, debuting against the Bulls in 2009 and playing seven games before making the decision to cross the Tasman to Sydney on the advice of his uncle who he credits as having a “massive” influence on his career.

Australian by virtue of his paternal grandmother, the up and coming halfback was forced to wait until the penultimate game of the 2012 season to add to his Super Rugby experience.

Having impressed his team mates and coaches with his dedication and commitment to training throughout the season, Grayson was rewarded with a place in the starting XV for the Waratahs penultimate match against the Brumbies at ANZ Stadium.

He played Super Rugby for the Blues and Waratahs before he moved to Edinburgh in 2013. Following a two-season stay in the Scottish capital he played 24 times and scored five tries before moving on to Glasgow Warriors.

Hart has won three caps for Scotland since making his full debut as a replacement against Canada in June 2014.

In April 2017, Hart became the second player to join Ealing Trailfinders from Glasgow Warriors when he signed on in time for pre-season.

In March 2018, Grayson signed for Worcester Warriors after spending the start of the season with Ealing Trailfinders, where he scored three tries from thirteen games.