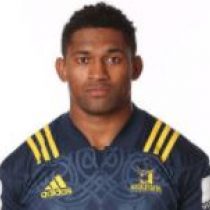 Born in Fiji, by the time he was 18 years old, Naholo was playing provincial rugby.

He made his provincial debut for Wanganui in the 2009 Heartland Championship, while still at Wanganui City College. In 2011 he was selected in the New Zealand Under 20 side for the Junior World Championship. Naholo was then called into the All Blacks Sevens squad in 2012.

After an impressive showing in the ITM Cup, he earned his first Super Rugby start in the Blues 21–28 loss to the Bulls in Round 4 of the 2013 Super Rugby season.

In 2014, he played in every match for Taranaki and scored nine tries as the team claimed the ITM Cup Premiership.

Naholo scored one of the best tries of the World Cup and continues to perform for the Highlanders and the all Blacks.

Injury again limited his time on the field during 2016 Investec Super Rugby but when he did appear he showed all of his trademark pace and brilliance.

Having recovered fully from his broken leg, Naholo has been included in the Highlanders Super Rugby squad, having already made 28 appearances in Super Rugby, scoring 22 tries.

In June 2017, the formidable line breaker was included in Steve Hansen's squad for the DHL NZ Lions series but was one of three 'Landers released for the Lions fixture in Dunedin.

Naholo has represented the All Blacks on 12 occasions, scoring six tries.

In July 2017, Naholo committed to Highlanders for another year. He has been a revelation with the 2015 Super Rugby champions, scoring 30 tries in 37 appearances.

In May 2018 Naholo signed a new deal with the Highlanders and New Zealand Rugby which will see him stay in the country until the end of the 2019 season.

Naholo has made 45 appearances for the Highlanders scoring 36 tries and has represented the All Blacks 18 times scoring 12 tries.

Naholo went into the 2018 November International with 24 test caps.

In May 2019, London Irish confirmed the signing of Naholo on an undisclosed deal.