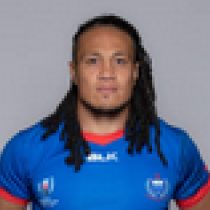 Domestically, TJ represented Otago in the ITM Cup. He has international experience as well with the New Zealand schools side in 2007.

TJ made his provincial debut in 2009 and his strong performances saw him named in the Highlanders squad for the 2013 Super Rugby season.

Ioane, who can also play number eight, made his debut for Samoa against Canada in November 2014 and earned his second cap in the loss to England at Twickenham.

In July 2016, he signed a three-year deal with the Sale Sharks, becoming a fan favourite in a short space of time.

After 55 appearances, the Samoan international was released by Sale Sharks and signed a deal with London Irish.

After 20 appearances for the club, scoring three tries, he agreed a loan deal with Glasgow Warriors.