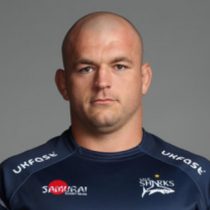 The 26-year-old plays for Timisoara and was the only prop in the squad not to be based in France at the 2015 World Cup. As an U20 he won the Junior World Trophy in 2009. He made his debut for the Romanian national side and for the Bucharest Wolves in 2013.

The first game that he took part in for Romania was against Argentina Jaguars for the Nations Cup, a competition that he won alongside in 2013.

In 2015, he was selected to represent Romania at the World Cup as well as the 2017 Rugby Europe Championship.

Tarus currently plays for Beziers in Pro D2 and has 16 caps for Romania, playing twice in the 2015 World Cup, against Ireland and Canada.

In April 2017, the versatile Romanian prop announced that he will join Sale Sharks on a two-year deal.