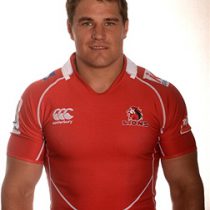 Jonker made his Super Rugby debut with the Cheetahs in 2008 and continued to represent them in Currie Cup.

In 2011 he joined the Pumas having earned over 60 Currie Cup caps for the Cheetahs.

He remained with the Pumas until the Lions signed him in 2014, he spent a year with the Lions before joining the Griquas in 2015.

Jonker has been placed on stand by for the Cheetahs 2017 Super Rugby season, as he continues to represent the Gruquas.