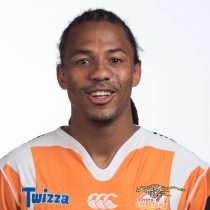 Afrika is one of the most exciting rugby sevens players in the world. The flyhalf/sweeper began his international career when he was selected in the South African under-20 squad in the 2008 IRB Junior World Championship that reached the third-place playoffs.

Afrika made his debut for the South African sevens team during the Dubai leg of the 2009–10 IRB Sevens World Series and ever since then has gone on to be one of the best Sevens players around. One of the finest accolades in his career came when he was named the International Rugby Board (IRB) Sevens Player of the Year for 2011.

Afrika was included in a 12-man squad for the 2016 Summer Olympics in Rio de Janeiro, and was named in the starting lineup for their first match in Group B against Spain and scored two tries and two conversions to help South Africa to a 24–0 victory.

He was a crucial member of the 2016/17 South Africa 7s squad that won the World Sevens Series.

The most celebrated Springbok Sevens player of his generation, Afrika was part of two World Series-winning Blitzbok squads (2017 and 2018)

In June 2020, he announced his international retirement from rugby but hadn’t quite given up on his Olympic dream.

Unless called upon, South Africa’s highest points’ scorer will not don the Blitzbok colours again after a mutual agreement between the player and Springbok Sevens management.

2011 Word Sevens Player of the Year