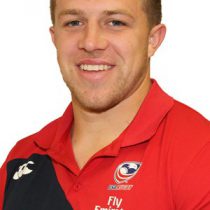 Tomasin made his Men’s Eagles Sevens debut at Gold Coast Sevens in 2013, scoring his first try in a semifinal win against Spain.

On June 25, 2016, he made his full international test debut for the Eagles in a 25-0 shutout of Russia at Bonney Field in Sacramento, CA.