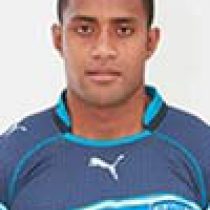 Samisoni Viriviri will be well known to sevens fans as one of the most lethal finishers in the game. The Nadi native was top try scorer on the sevens circuit in 2013, has been a key player for his national side since his debut in 2011, and was voted best Fijian player by his teammates in 2013.

Having previously rejected offers to join the 15s game, Viriviri signed a contract with Top 14 side Montpellier, with a view to joining in June of that year.

Viriviri was selected to represent the Fiji squad for the 2016 Summer Olympics.