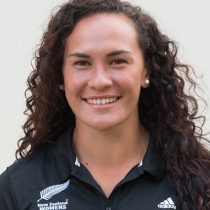 Woodman earned her first call-up to the Black Ferns for the 2013 International Series after her leave-‘em-for-dust speed and sidestep caught the eye of the selectors.

She re-joined the Black Ferns in 2016 for the first time since her debut Series, having missed the 2014 and 2015 campaigns to focus on sevens. She played all five Tests - four at centre and one on the wing - and scored four tries.

Having been recognised on the global stage with the 2015 World Rugby Women’s Sevens Player of the Year Award, she heads to the 2017 Women's World Cup with 11 Test caps.