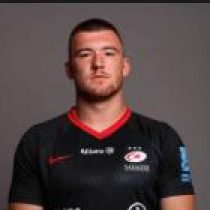 Hailing from London, Matt Gallagher is qualified for England, New Zealand and Ireland with the latter coming his paternal grandmother and grandfather who are from Limerick and Derry respectively.

A former Old Albanian loanee, the Londoner made his Sarries debut in November 2014. The son of 1987 World cup winning All Black, John Gallagher, Matt made his presence known after being selected in Martin Haag's 28-man squad for the Junior World Cup in Manchester 2016. Gallagher was named Player of the Year in 2015, while he was on loan with the Storm in the A-League.

The former Saracens Academy Player of the Year, was part of the England U20s World Championship-winning side in 2016 and has continued to rise through the ranks since.He joined Bedford Blues on a dual-registration ahead of the 2016/17 campaign but was called into action early for Saracens early on, completing 80 minutes on his first Premiership outing and scoring in his third.

Two seasons later a European outing came for Gallagher, at home to Glasgow Warriors, as well as a number of league opportunities. He also helped Saracens Storm to the Premiership Rugby Shield title.

In January 2020 he signed a two-year deal with Munster. In December he lined out against the province in the round three Champions Cup encounter at Thomond Park