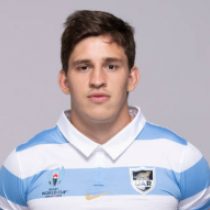 Lezana was a member of the Argentina Under-20 side which competed in the 2013 and 2014 IRB Junior World Championships.

he also represented the Argentina Jaguars team in 2014 in their matches against Uruguay and Canada A, making his senior debut for Los Pumas in November 2014, coming on as an early replacement for the injured Leonardo Senatore in an 18 -13 win over France in Paris.

At the time of writing, Lezana has 13 Test caps for Argentina & made 11 appearances for the Jaguares during the 2017 Super Rugby campaign.

Lezana heads into the 2018 Rugby Championship with 3 test caps.