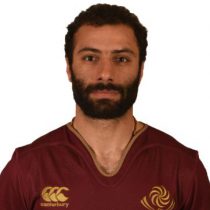 Merab "Meko" Kvirikashvili started his career as a scrum-half before stiff competition in the Georgian national side.

Kvirikashvili made his Georgia debut as a teenager in 2003 against Portugal, and made the squad for Georgia's first ever appearance in a World Cup later that year, playing in all four of Georgia's matches from the bench.

However he failed to establish himself in the Georgian side over the next couple of years, with Irakli Abuseridze and Bidzina Samkharadze both ahead of him for selection in the scrum half position.

He made the switch to flyhalf in 2007 and in his first start for his country in the position Georgia beat Romania away in Bucharest, he has remained a regular member of the Georgian side ever since.

He was an important player during Georgia's 2007 World Cup campaign, starting all four matches and he showed good form against Ireland as Georgia narrowly lost 14–10 and was named man of the match in Georgia's first ever World Cup win against Namibia.

After the 2007 World Cup Kvirikashvili was moved to full back to accommodate a new fly half Lasha Malaghuradze. In 2010 he broke a record he previously shared with Paliko Jimsheladze for most points scored for Georgia in a match, with 32 points in Georgia's 77–3 thrashing of Germany.

After Malaghuradze suffered an injury and then a loss of form, Kvirikashvili returned to the first choice fly half position in 2011 helping Georgia to an undefeated season in the European Nations Cup.

He represented Georgia at the 2011 Rugby World Cup which was his 3rd World Cup.

Kvirikashvili returned to the starting position in 2012 though and started every game for Georgia that year, and with some better kicking performances he broke the Georgian record for most points scored in a calendar year.

In July 2016, Kvirikashvili was involved in a car accident on the Kutaisi-Samtredia highway, while travelling with fellow rugby player Giorgi Lominadze and their respective wives. Lominadze and his wife survived, but Merab's wife and mother of their four children died in hospital, as did three passengers travelling in another vehicle involved in the accident.

After losing his wife in the accident he took time away from rugby to grieve and returned to the side in November that year.

Kvirikashvili played eight times in 2017 and took his caps total to 106.