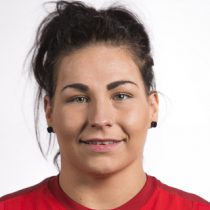 Amy earned her international debut for Wales Women at the 2015 Women's 6 Nations.

The fitness instructor and Level 3 Personal Trainer has previously represented Wales in weightlifting before being called up to the squad that would compete at the 2017 Six Nations.

Having scored twice in the defeat to France in the final game of the 2016/17 Six Nations, Amy's further impressive performances saw her being called up to the Wales squad ahead of the 2019 Six Nations.