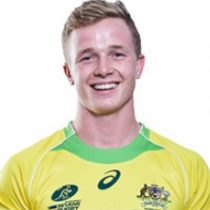 A product of Randwick Rugby Club, Henry Hutchison, represented the Australian Schoolboy and Australia U20s before making the switch to the 7s format and mad his debut for Australia 7s in the 2015 Cape Town 7s.

Hutchison continued to perform on the 7s circuit and was named the 2016 World Rugby Sevens Rookie of the Year and earned a spot in the Australian squad for the 2016 Rio Olympic Games.

The speedy winger made his return to the 15-man code with selection in the Australian U20s squad currently over in Gerogia for the 2017 World Rugby U20s Championship.

In June 2017 Hutchison signed a deal with the Melbourne Rebels for the 2018 Super Rugby season.

By July 2018 Hutchinson hadn't made a single appearance for the Rebels in Super Rugby and was granted an early release by the side in order to sign a deal with the National 7s side ahead of the World Cup Sevens.