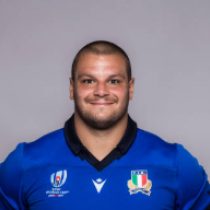 Zani is an Italian hooker born in April 1989 and currently playing for Benetton Rugby in Treviso.

He made his Test debut for the Italians against Scotland in Singapore in June 2017.

Zani has played for Gran Ducato, Petrarca, Mogliano and lined out for Emerging Italy in 2015.

Zani was named in Italy squad for the 2017 November Internationals.

As of December 2019, he has made 37 appearances and has scored 5 points for Benetton.