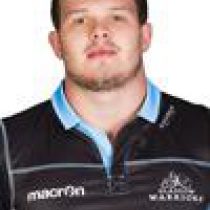 Fenton secured a place on the Elite Development Programme and was aligned to Glasgow Warriors for the 2014–15 season. This meant he could continue playing for Stirling County whilst training and challenging for a place at the Warriors.

He made his competitive debut for Glasgow Warriors, from the bench, in the Pro12 match against Munster Rugby at Rugby Park, Kilmarnock on 19 February 2016. The Warriors won the match 27–24, securing a try bonus point in the process.

In July 2016, it was announced that Fenton would join London Scottish as part of the performance partnership with the SRU. This was part of a loan move but he was released by London Scottish back to the Warriors so he could play in their match against Canada 'A.

In September 2017, Edinburgh announced the signing of Scottish Rugby Academy graduate Fenton on a one-year deal following a successful trial at the club.

The versatile Strathallan School product, 21, can play at both hooker and prop and will provide cover across the Edinburgh front row for the 2017/18 season.