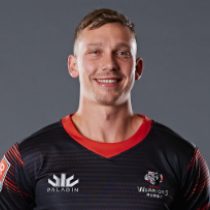 The Scottish-qualified back, who spent three weeks on trial at Scotstoun during season 2015/16, also plays for Glasgow Hawks in the BT Premiership when he's not selected for the Warriors.

Glasgow Warriors signed him on a one-year partnership contract in 2016.

He made his PRO 12 debut against the Scarlets in February of 2017. He eventually left Scotland for Germany, where he was also qualified to play, and played with Heidelberger RK for the 2017-2018 season in the Rugby-Bundesliga.

He has eight caps for Germany, seven of them starts. He made his debut against the USA National Team in November of 2017 at fullback and the last of his tests were against Russia at Heidelberg in March of 2019.

2020 saw him sign a deal with Major League Rugby side Utah Warriors.