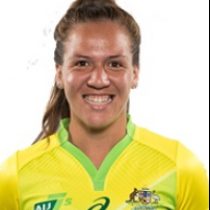 Evania Pelite was a member of the Australian squad that won Gold at the Rio Olympics in August 2016, scoring a try that gave her country the lead in the final against New Zealand at Deodoro Stadium.

A member of the Australian Youth Olympic Festival Sevens team that won Gold in Sydney in 2013, Evania Pelite is a dual international, having also represented her country in Touch Football.

She developed her game as a member of the Queensland Schoolgirls side that won the National Schools Rugby Sevens Tournament on the Gold Coast in 2012. Pelite has impressed Head Coach Tim Walsh throughout her Sevens World Series career for her knack of breaking the line with her searing pace as well as her ability to take restarts.

Starting off the year with the University of Adelaide in the Aon Uni Sevens Series, Pelite continued to impress her coaching staff, furthering her selection in the team for the Central Coast Sevens, Oceania Sevens and has now been named in the side to kick off the World Series Circuit in Dubai in December.

She has been included in the Women's squad for the Rugby World Cup Sevens.