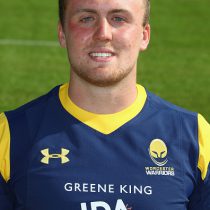 Sam has previously been capped at under 18 level, was named in the starting line-up as England bounced back from their 24-6 defeat by Scotland in February 2016.

He earned his first cap for England U20s when they traveled to Italy in the 2016 Six Nations.

In August 2016, Sam was announced to have joined London Scottish on dual registration, playing for London Scottish in the 2016 Greene King IPA Championship and also eligible to play for Warriors and Worcester Cavaliers if required.