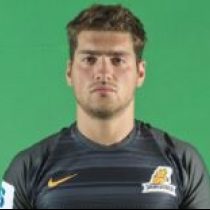 Santiago Alvarez was identified as a potential talent early on, being selected for the nation under 18 side. In 2013 he represented the under 19 and under 20 side at the age of only 19. He played in all 3 group games at the 2013 Junior World Cup in France. After an impressive tournament he was included in the Puma side and made his senior debut against Uruguay in April 2013. Alvarez played at two tournaments on the 2013 7s circuit and was reselected for the 2014 squad.