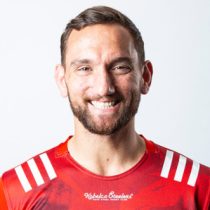 Aaron Cruden has had a somewhat remarkable career to date. Attending the well known Palmerston North Boys' High School, he had a decorated under age career until the age of 19, when he was struck with testicular cancer.

Cruden made his provincial debut for Manawatu Turbos in 2008 and captained New Zealand to the 2009 IRB Junior World Championship title in Japan, as well as being named IRB Junior Player of the Year 2009.

He won his battle with the disease and went on to make his debut for the Hurricanes in Super Rugby at the age of 21, before moving to the Chiefs where he was a key director of the Chiefs’ back-to-back Investec Super Rugby titles in 2012 and 2013.

He made his provincial debut for Manawatu in 2008 and captained the New Zealand Under-20 to win the 2009 IRB Junior World Championship in Japan. He was also named the IRB Junior Player of the Year

Cruden is an immensely skillful player, whose good hands and quick speed of thought make him a handful for any defence. Theses attributes, along with some impressive Super Rugby showings, led to his selection for the New Zealand side, making his debut in 2010 against Ireland.

Recovery from injuries - including knee reconstruction surgery - kept him off the field for large periods in 2015 but he has been in stellar form for the Chiefs in 2016.

He would go on to spend much of the 2016 international season on the bench as Beauden Barrett impressive form meant he kept his starting position.

The 2-time Rugby World Cup winner played his 50th Test match in the final Test match against the British and Irish Lions.

Cruden joined Montpellier at the end of the 2017 Super Rugby season having played 114 Super Rugby matches scoring 828 points for the Chiefs & Hurricanes (1 season).

He made his Top 14 debut against Agen in the opening round of the 2017/18 season. He made 40 appearances for the french side, scoring 93 points in two seasons.

Cruden rejoined the Chiefs in 2020 for the Super Rugby season before signing with Japanese side Kobe Kobelco Steelers.