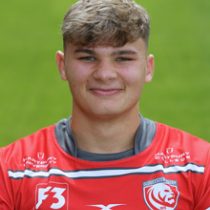 The Hereford-born flanker was a pupil at St Peter’s High School in Gloucester before joining the club’s Academy set-up in 2017. The following year he made his first-team debut as a replacement for Ben Morgan in an Anglo-Welsh Cup fixture against Newcastle Falcons.

Since then, he has combined life with the Cherry & Whites by featuring initially for Cinderford in the National League and then Hartpury College in the RFU Championship.

He made his first-team debut in 2018 and in the same year represented England U20s in Six Nations and also earned selection for the Junior World Championships in France.

The A-league regular has was once again picked for England’s U20 Six Nations squad in 2019.

To date (2 March 2020), he has featured 12 times for Gloucester, scoring tries against Harlequins and London Irish in this season’s Premiership Rugby Cup before signing a two-year deal with Exeter Chiefs.