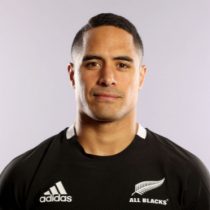 One of the premier halfbacks of the modern game, Aaron Smith ignites backlines with his bullet-like pass, which is widely regarded as one of the best in world rugby, while is also a strong defensive player. Smith quickly established himself as the All Blacks' first-choice halfback amidst fierce competition, playing 13 Tests in his debut season in 2012.

Born in Fielding in Manawatu, Aaron Smith began training as a hairdresser before his days as an electric scrum half. Making his name in the ITM cup winning Manawatu side in 2011, Smith has since enjoyed two explosive seasons with the Highlanders in Super Rugby.

In 2008, Smith was part of the New Zealand Under 20 side which claimed the Junior World Championship in Wales and in 2010, the Ngati Kahungunu-affiliated Smith made his Maori All Blacks debut.

Smith debuted against Ireland during their three-test tour in 2012, making his debut in Auckland in June of that year, having previously played a number of games for the New Zealand Maori side.

In 2014 he won the Tom French Memorial Trophy for Maori Player of the Year after a great season for both the Highlanders & All Blacks.

In 2015 he became a Super Rugby champion with the Highlanders and a RWC champion later in the year. His 129 Highlanders appearances put him second only behind great mate Ben Smith.

In April 2019, Smith penned a new deal with the Highlanders and NZ Rugby to remain in New Zealand until at least 2021.

Aaron continues to set the standard for halfbacks internationally, he is unmatched in speed of play.

In March 2021, he signed a new contract with New Zealand Rugby, his Highlanders club and Manawatu provincial union that will see him stay in New Zealand through until 2023.