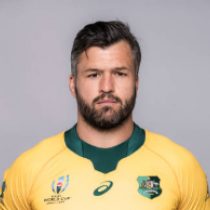 Adam Ashley-Cooper is widely regarded as one of the most versatile players in rugby union, and has made a career of his ability to play in the centre, wing and fullback positions. Ashley-Cooper signed an ARU development contract with the Brumbies in 2004 and spent the majority of the year representing the Australia 7s.

In 2005 he made his Super Rugby debuted against the Crusaders and was called into the Wallabies Tri-Nations squad making his debut against the Springboks in Perth. Between 2009 and 2011 he missed just four of the 56 test matches for Australia, scoring 5 tries at the 2011 Rugby World Cup.

After 7 years with the Brumbies Ashley-Cooper signed a deal that would see him represent the Waratahs in the 2012 Super Rugby season. In 2014 he was part of the successful Waratahs team that lifted the Super Rugby title.

At the conclusion of the 2015 Super Rugby season, he signed for French club Bordeaux-Begles on a two-year deal. Ashley-Cooper has amassed over 125 Super Rugby caps and has over 100 Test caps for the Wallabies.

In January 2017, the Australian wing was released by Bordeaux. In May 2017 he was named in the Barbarians squad to face England and Ulster.

In June 2017, Ashley-Cooper signed for Japanese club Kobelco Steelers, this will be his fourth club, having played for the Brumbies, Waratahs and Bordeaux in his 13-year career so far.

He joined Matt Giteau in the Japanese Top League after his long-time Wallabies teammate signed with Suntory. In 2019, It was announced that Ashley-Cooper would return to the Waratahs and earned a recall to the Wallabies and heading into the Rugby World Cup he had 118 tests to his name.

In February 2021, Ashley-Cooper confirmed that he would extend his career by another year signing for the LA Giltins for the 2021 season. Ashley-Cooper played 121 tests duirng his 15-year run (2005-19) which netted 39 tries.

Ashley-Cooper arrives in the USA as a Super Rugby champion, with the NSW Waratahs (2014) and Japan’s Top League Champion with Kobe Steelers (2018).