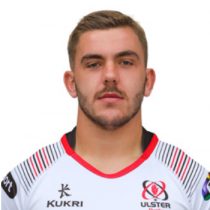 McBurney has been capped for the Ireland 2016 World Rugby Under-20 Championship side and played in their Six Nations campaign.

Abbey Insurance Academy hooker McBurney made his first competitive appearance for Ulster in R5 of the Pro14.

By the end of the 2017/18 season McBurney had made 3 appearances for his Province and was promoted to the senior squad ahead of the 2018/19 season.

His role in the Ulster has been growing as he continues to make cameo appearances off the bench.