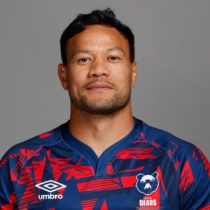 Alapati Leuia re-joined the Hurricanes in 2012 for his third full Super Rugby season fresh from being named Wellington Player of the Year in 2011. A specialist centre, he saw much of his game time on the wing in his eight caps in 2012. He had missed the start of 2011 through injury, but played in nine of 10 of the remaining matches, making seven starts on the wing and two at centre.

Previously, he made 13 caps in his debut Super Rugby season, backing up an active ITM Cup season for the Vodafone Wellington Lions that saw him play 13 games as both a centre and a wing. Leuia then made his full debut at centre against the Cheetahs in Bloemfontein, and played off the bench the next week against the Stormers and on the wing the following week against the Bulls. The Hurricanes lost these three matches, making it a tough introduction to Super 14 rugby for the hugely talented Leuia.

He made his international debut for Samoa versus Scotland in 2013, earning eleven caps for Samoa between 2013-2017.

The Samoan signed for Bristol for the 2017/18 campaign after their relegation to the Championship and is currently still with the club.