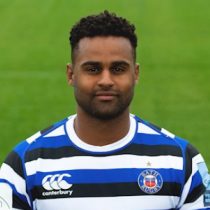 Brew first joined the Dragons on a season long loan from the Ospreys in the 2006/2007 season and became an instant hit, appearing 28 times over the course of the season including 25 starts on the wing.

Brew has represented Wales at U16, U18 and U21 levels and was called into Wales's squad for the 2007 RBS Six Nations, making his senior debut as a replacement in the match against Ireland.

After his time with the Dragons, Brew decided to leave for France and joined Biarritz Olympique. After two seasons with the French side Brew signed a three year deal with the men of Gwent.

Following injuries during his spell with the Dragons after his return from Biarritz Olympique, Brew left the Dragons by mutual consent and signed a short-term deal with Bath, a deal that was extended until the end of the 2017/18 season.

Brew scored over 150 points at Dragons which saw him win international honours with Wales scoring three tries in his nine appearances for his country.

He enjoyed his best season in a Bath shirt to date in 2017/18, and was rewarded for his consistent performances by being named as the Club's Player of the Season.

Brew went into the 2018/19 season with 31 Premiership caps for Bath as 6 caps in the Champions Cup.