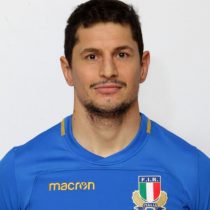 Zanni is an Italian rugby player hailing from Udine. He currently plays for Treviso in the Pro 14 and the European Rugby Champions Cup, and has done since 2009. His usual position is as a number 8, but in national team he plays in the openside flanker position, or in the blindside flanker position, showing his huge versatility.

Zanni made his debut for the Italian national team in November 2005 in a Test against Tonga and has been a regular in the Italian test team ever since. In 2015 he was included in the Italian squad for the Rugby World Cup.

After being left out of Italy's June tour to North and South America, he was recalled to the Italy squad for November Tests against New Zealand, South Africa and Tonga.

In January 2018, he was named in the Italy squad for the 2018 Six Nations tournament.

Zanni's next test appearance for the Azzurri saw the veteran reach the 100 test cap mark.

Ahead of the 2019 Six Nations, Zanni has had 50 previous 6 Nations appearances. He has scored 5 points.