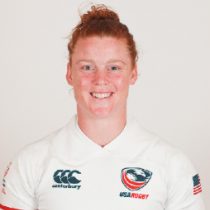 Kelter was a dual-sport athlete at the University of Wisconsin-Madison, playing hockey and soccer. She won gold as captain of the U.S. U18 women's hockey team at the 2009 IIHF World Women's U18 Championship and was named Daily News Girls Athlete of the Year in 2008.

Kelter joined fellow Chugiak Alumna Lorrie Clifford at the Olympic Training Center in Chula Vista in 2014, and has played in each Women's Sevens Series tournament since her debut at that year's Guangzhou Sevens.

Later that year, she transitioned to 15s where she earned her first cap with the Women's National Team against France. In 2017, she joined the Women's Eagles for the Women's Rugby World Cup in Ireland where she helped the team to an astonishing fourth place finish before returning to sevens.

Kelter heads into the 2019 Women's Rugby Super Series with 9 test caps to her name and has featured in 28 World Sevens Series events.