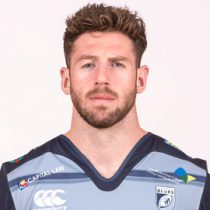 Cuthbert was born in Gloucester to an English father, but is eligible to represent Wales through his Wrexham born mother. Cuthbert’s performances for his college, UWIC, and his then club side, Cardiff RFC, caught the eye of the Welsh 7’s coach, Paul John who selected him for Wales’ 7’s squads for the 2010 Commonwealth games as well as the IRB world 7’s series in 2009-2010 and 2010-2011.

Cuthbert made his Wales debut in 2011 against Australia and was an integral part of Wales 2012 grand slam winning team, scoring tries against Italy, France and Scotland. To date, Cuthbert’s biggest contribution for the Cardiff Blues was his brace of tries against Racing Metro in 2011, a victory which booked Cardiff’s place in that seasons Heineken Cup quarter finals.

In 2013 Cuthbert's fine form was awarded with inclusion in the 2013 British and Irish Lions squad, when he went on to start the opening test of the series, scoring a well taken try that game. He has amassed over 65 caps for the Cardiff Blues and has scored over 30 tries in the process.

He has become a regular in the Welsh squad partook in the 2015 Six Nations Championship. He was also included in the extended squad for the 2015 World Cup.

In May 2017, Cuthbert was named in the Wales squad for the two-Test summer tour. The Cardiff Blues man has played 47 times for Wales scoring 15 tries.

After 7 years at Cardiff Blues, the winger agreed a three-year deal to join Exeter Chiefs ahead of the 2018/19 season.

Although injuries hampered part of Cuthbert's debut season, he still featured in 16 first team games - including the Gallagher Premiership Final against Saracens at Twickenham - and scored tries against Sale Sharks and Gloucester.