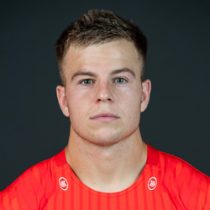 An exciting centre who has come through the ranks at Munster, Alex McHenry was a Munster Schools Senior Cup winner with CBC in 2016 and prior to that he captained Munster U19s to Interprovincial success in 2015.

Also winning representation with Munster U18 Schools and Ireland U19s, he made his Ireland U20 debut against France in the 2017 6 Nations. On the club front the centre plays with Cork Constitution and enjoyed triple success with the club in the AIL, Bateman Cup and Munster Senior Cup in the 2016/17 season. Made his B&I Cup debut against Doncaster in January 2017 and featured for the Ireland Men's 7s during the 2017/18 season.

McHenry played all six of Munster A's Celtic Cup games in the 2018/19 campaign and made his senior debut away to Benetton in the Guinness PRO14 in April 2019.