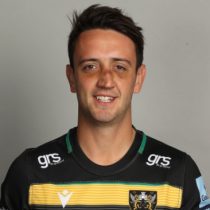 Mitchell graduated to the U18 squad at Sale Sharks Academy and made his England debut against Scotland at that level in March 2014. Born in Maidstone, Alex was formerly a member of the Sale Sharks academy before joining Saints Academy in 2015.

His first start was in the 62-5 win over Portugal in the subsequent FIRA/AER European Championship match at Poznan in Poland and his maiden try followed against France in March 2015 in the ninth appearance at that level.

Maidstone-born, he had moved to the north-west with his family and went on to captain Lymm HS and won Cheshire Cups with his school and club. Alex signed for Northampton Saints from Sale for the 2015/16 season.

Mitchell has represented England at international level, playing at Under-16, Under-17 and Under-18 levels, before being called up to the Under-20 squad in October 2015 and continued to represent the side until 2017.

His debut season with the Saints first team earned him nine caps as he featured in games against Leicester Tigers, Wasps and Saracens.

Mitchell also helped the Wanderers lift the Premiership Rugby A League trophy in 2017 and 2018, defeating Gloucester United and Exeter Braves respectively to bring the trophy to Northampton.

In January 2019, he signed his first senior deal with Saints. Later that year he was named in the England XV to face the Barbarians in May.