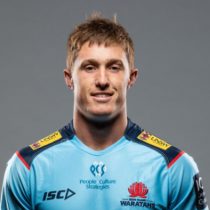 Originally from Glen Innes in Northern NSW, Newsome has made his way back home to NSW after a quick stint in Western Australia.

The talented outside back was a border at St Joseph’s College in Hunters Hill and moved on to represent Eastern Suburbs in the Shute Shield after school. Newsome was a member of the NSW U20s team in the 2015 season, he then went into a very successful NRC season for the NSW Country Eagles in 2016. He earned a reputation for scoring intercept tries in 2016 scoring 3 for the Country Eagles.

Newsome earned a trial with the Western Force in the preseason before signing a deal for the 2017 season. The NSW country product returns to the Waratahs in 2018 after a strong NRC showing particularly at outside centre. Newsome made his debut for the NSW Waratahs against the Stormers in the team's opening match of 2018 at Allianz Stadium.

Since his debut, Newsome has become a regular in the Waratahs' squad making 48 appearances for the side before the 2020 Super Rugby season was brought to a halt.