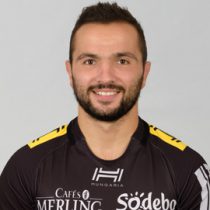 A former France u20 international, Alexis Bales began his professional career having represented his country at youth level including the U20 World Championship in 2010.

Before even featuring at the tournament, Bales had made his debut for Agen and spent nine years at the club racking up 126 appearances in the TOP14 and PROD2.

A move to La Rochelle followed in 2016 and remained a regular member of the squad until 2020 when he signed a deal to join Toulouse.

He spent 4 seasons at La Rochelle making 79 appearances for the club.