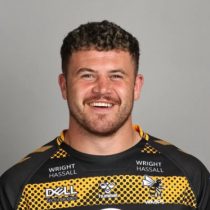 A powerful hooker, who can play in the back row, Alfie Barbeary was tipped for the highest level from a young age.

He joined Wasps’ Senior Academy squad for the 2019/20 season and proceeded into the senior squad in July 2020. Barbeary arrived from Bloxham School, where he won the Natwest School Plate final in March 2019.

The Wasps Under 18s graduate scored on his Wasps first-team debut against Gloucester Rugby at Kingsholm in the Premiership Rugby Cup in October 2018. Barbeary came off the bench four times in Wasps A’s 2018/19 Premiership Rugby Shield campaign, scoring one try.

He made his England U20 debut against Scotland in the 2019 Six Nations Championship, also scoring a try, while he was also part of the squad for the 2019 World Rugby U20 Championship, although his tournament was cut short following a red card against Ireland.

He scored on his Premiership debut off the bench against Worcester in July 2020 before scoring a hattrick against Leicester Tigers in his first start in September.

By the end of the 2019/20 Premiership season, he had made 5 appearances for Wasps scoring four tries.

In November 2020, he received his first England senior call-up ahead of their Autumn Nations Cup clash with France.