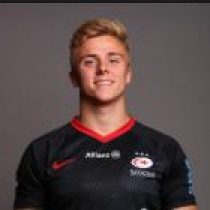 Crossdale joined the Saracens Academy after spells at Sale Sharks and Newcastle Falcons.

The young winger, who has played at fly-half and full-back, grew up supporting Sale Sharks and was involved in their Academy in his mid-teens before a spell with Newcastle Falcons.

A former Sedbergh College student, he spent two years at the school and signed his first professional contract with the club in May, 2016. Crossdale was included in the England U20 squad for the World Rugby U20 Championship in 2017.

He made his first-team debut for Saracens against Harlequins in 2017 and grabbed a brace of tries at Allianz Park in the 2018/19 Premiership Rugby Cup as the Men in Black reached the final.

The Academy graduate furthered his development in 2019 with a season in Christchurch, New Zealand. Whilst at Sarries, Crossdale has been capped by England Under-20s and featured in the 2017 and 2018 World Championships.

January 2021 saw him being included in Eddie Jones’ England Shadow Squad for the Six Nations.