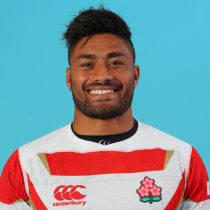 Born in Tonga and playing virtually all his rugby in Japan, Mafi had a tough decision to make in 2014 where he was called up by both Japan & Tonga. He chose Japan and went on tour with the Brave Blossoms to Europe.

He was selected for the 2015 Rugby World Cup and played a crucial role in the historic 34-32 victory over the Springboks by providing the winning pass.

In August 2016, Mafi signed a deal with to join the Melbourne Rebels from NTT Communications club in Japan.

Having joined the Rebels squad for the 2017 season, the backrower was named the 2017 Melbourne Rebels Players’ Player at the club’s end-of-season function.

He led the league for runs (184) and ranked first for forwards in the competition for run metres (1378m), offloads (30) and second for tackle busts (48). He also led the Rebels for minutes played (1145), line breaks and pilfers.

In August 2017, the Rebels secured Amanaki Mafi for the 2018 Super Rugby season after the powerful backrower signed a contract extension

The highly sought Japanese international, named the Rebels 2017 Players’ Player, has agreed to a one-year extension to remain with the club for a second season.

In October 2017, Mafi topped the Australian-franchises Super Rugby Player of the Year voting with the Melbourne Rebels.

Mafi didn't miss a single match for the Rebels during his two-season stint with the club making 31 appearances and scoring 7 tries.

The Japenese International was involved in an altercation with teammate Lopeti Timani and was banned from playing in Japan during his court case after assault charges were laid.

He returned to action late in 2018 following lengthy delays in the case and was added to the Sunwolves Super Rugby squad in March 2019.

In 2019, he was named in Japan's squad for the Rugby World Cup and has represented the side 27 times as they head into the quarter finals of the tournament.