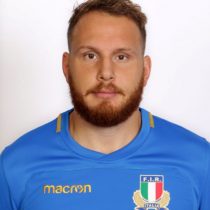 After growing up in the youth sporting team of Piacenza Gossolengo, Lovotti passed to Rugby Calvisano in the 2008-09 season.

Low Italian system ranks saw the prop's return to his previous youth club at the top flight of the National Championship of Excellence where he immediately won the title of Champion of Italy and the Excellence Trophy.

Helped Calvisano win Eccellenza title in 2014 and made his PRO12 debut for Zebre at Ulster in September 2014.

Represented Emerging Italy at the 2012 and 2013 Nations Cup in Bucharest and also at Tbilisi Cup in 2014. Made his test debut starting in the RBS Six Nations game against France in Paris in 2016 round 1, started all Championship games since

Toured the Americas last summer adding three more caps at loosehead and gained another against the All Blacks in Rome in November.

Lovotti, currently has 38 appearances for his country.