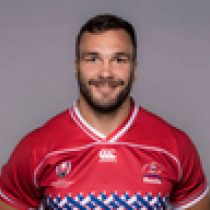 Hailing from Moscow, Russia, Ostrikov is a hard-working lock forward who can also operate in the second row. His professional career began in France with Agen before joining Aurillac in the Pro D2. In 2011, Ostrikov moved to England and Sale Sharks in the premiership.

Andrei joined the Sharks in 2011 as one of Steve Diamond’s first signings when he returned to the club. Andrei previously played for Agen and Aurillac and was known to Steve Diamond who gave him his International debut when he was in charge of the Russian National Side. Andrei was a member of the Russian side the played in the 2011 World Cup in New Zealand.

Andrei has played 26 times for Russia and has also racked up over 100 appearances playing for Sale Sharks. He was a relatively late starter to rugby as he was initially a volleyball player and only took up rugby at the age of 16. As well as being a dominant force in the lineout he has scored some important tries for Sharks.

Still under 30 years of age Andrei has been a regular starter for Sharks this season and has put in some great performances to earn his new contract.

In April 2017, Sale Sharks announced that Ostrikov had signed a new two-year deal with the club. Andrei is now one of the longest serving players at the club and is a model of consistency.