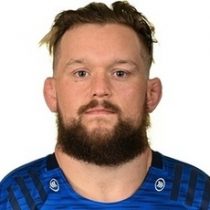 He made Ireland's World Rugby Under 20 Championship squad for 2016, making the final of the competition, impressing with his ball-carrying abilities and dominance at scrum time.

Porter has switched over to tighthead and strung together some impressive performances in the number three shirt for club side UCD.

The powerful prop has all the physical attributes to make it at tighthead but now must go through the difficult process of learning the technical side of the position.

Porter was then named in Ireland's squad for the 2020 and 2021 Six Nations, following the season he did enough to earn a call up to Warren Gatland's 2021 Lions Squad due to tour South Africa later that year

Unfortunately, Porter was ruled out of the Lions Series with a toe injury before the Lions even left for South Africa.