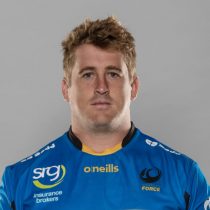 Andrew was named on the Reds’ bench twice in two seasons before finally making his debut in his third match-day squad in 2015 – narrowly beating his forwards coach and mentor Nick Stiles, who sat on the bench three times before making his debut back in 1993.

Ready made his Super Rugby debut off the bench against the Hurricanes during ANZAC Round commemorations at Suncorp Stadium. He played a further three games as reserve hooker in the 2015 season.

He has scored 10 points in 19 Super Rugby appearances.