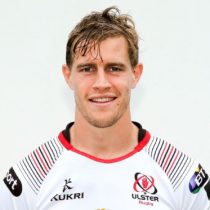 Trimble studies theology at college and he has lots of God given talent on the pitch. Trimble made his Ulster debut in 2005 and is known as a physical winger who hits fantastic lines.

He made his Irish debut in 2005, replacing Brian O’Driscoll in the centre and his performance was such that he started the next game, against Romania scoring twice.

Trimble has been an ever present for Ulster since making his debut and, when fit, is invariably one of Ireland’s first choice wingers. He was also part of the Irish squad who won the 2009 Grand Slam. He has also appeared in two World Cups in 2007 and 2011. In 2013/14 Andrew has a stand out season for both Ireland and Ulster.

In Aug 2016, Trimble was named Ulster captain alongside teammate, Rob Herring for the 2016/17 season.

Trimble has been an ever present figure in Joe Schmidt's match day squads. The Ulster wing has 70 Ireland caps to his name and to played a prominent role in Ireland's 6 Nations campaign.

He made his debut for Ulster and Ireland in 2005, going on to make 230 appearances for his province and 70 caps for Ireland, scoring 13 tries.