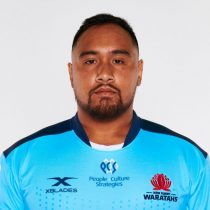 Andrew Tuala touched down in Newcastle in 2013 with not much more than the clothes on his back, a few hundred dollars in his wallet and the hope of playing some decent rugby.

The powerful hooker at one point his weight ballooned to 143 kgs and worked as a nightclub bouncer, poured concrete and turned out for Wanderers club helping the side win a Newcastle premiership and racked up thousands of kilometres travelling down the freeway to Sydney to play with Randwick, West Harbour and Norths.

Tualais determination, desire and discipline to rise from a handy park rugby player to a fully-fledged professional. While on an elite development squad contract, Tuala's opportunity came after Tatafu Polota-Nau was recalled by English club Leicester.

He went on to make his Super Rugby debut against the Crusaders in the final round robin game of the 2019 season.

Having shed a good 13kgs and a mindset of work first, team first saw Tuala earn a full time contract with the Tahs for the 2020 Super Rugby season. The hooker committed to 5am starts – from Newcastle to Sydney – during the 2019 season to prove to coaches he deserved a chance in the squad.