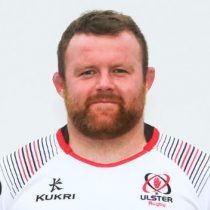 Warwick, who attended Ballymena Academy, is a product of Hughes Insurance Ulster Academy and plays his club rugby for Ballymena RFC.

He made his Ulster debut in March 2014 against Cardiff Blues and scored his first try for the Province in the home win over Treviso in February 2015.

The prop can operate on both sides of the scrum and has made over 56 Ulster appearances.

In November 2016, Warwick penned a three-year extension, which will keep him at Kingspan Stadium until 2020.