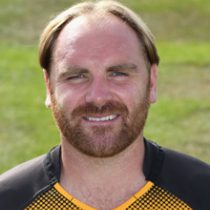 From early on in his career. Goode established himself as a frontline goalkicking flyhalf who had an astronomical right boot. Coming up through the ranks at Leicester Goode represented England at all underage levels before moving to Saracens where he had a rather dismal experience which ultimately lead him to return to Welford Road.

During his second spell at the club Goode earned International honours, making his debut in the 2005 Six Nations. Goode failed to kick on in terms of international appearances and moved to pastures new in '08 when he linked up with Brive before enjoying a short spell with the Sharks in Super Rugby. After a spell in South Africa, Goode joined Worcester and spent 3 years with the Warriors before moving to Wasps.

Goode enjoyed a good couple of seasons at Wasps and became the second highest points scorer in the history of the Premiership. Goode was scheduled to join London Irish for the 2015/16 season but was forced into retirement in September due to injury.

After a few months out of the game, Goode came back into rugby and signed a 3 month deal with Newcastle Falcons as injury cover.

He made his last appearance for Newcastle on 27 March, 2016 and was shortlisted for the 2016 RPA Player of the Year award.

Leicester Tigers player of the Year 2005