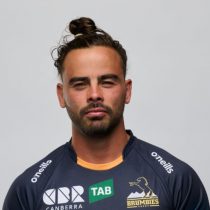 Born and raised in Brisbane, Andy Muirhead attended Brisbane State High School, playing for their first XV rugby team and narrowly missed out on selection for the Australian Schoolboys.

After school, the talented outside back signed with Souths to play in the Brisbane Premier Rugby competition. After being unable to make further representative teams, Muirhead (with the assistance of a friend who whom knows Tana Umaga) moved to New Zealand to play ITM cup under Tana Umaga with Counties Manukau.

The move helped Muirhead further his career as he returned to Australia in 2015, helping Souths win the Premier Rugby title that year, and winning further honours to play with Brisbane City in the NRC rugby competition.

Sensing that there were no opportunities with the Reds, Muirhead moved to Canberra and managed to secure a contract with the Brumbies in the Super Rugby competition.

Enjoying an excellent season with his club side, Canberra Royals, Muirhead arrived in Canberra from Brisbane to attempt to break into the Super Rugby competition and took to the field as a late replacement for Henry Speight against the Kings in Port Elizabeth.

He made his full debut for the club during their tour of South Africa and Argentina in 2017 and made an instant impact with a brace of tries off the bench in Buenos Aires, before putting pen to paper on his twelve-month deal to stay with the club.

A tricky winger, with an eye for the try line, Andy Muirhead has grown as a player every year since joining the Brumbies halfway through the 2017 season.

Since signing with the Brumbies, Muirhead has established himself as a valuable member of the squad.

In 2019, Muirhead’s opportunities were limited at times, with options across the back three meaning competition for places was fierce but he managed to take his Super Rugby cap tally to 25 by the end of the season.