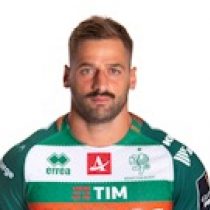 Primarily seen on the wing, but also available in the centre , the National Under 20, born in Campania, moved to Treviso with his family and started playing his rugby with Ruggers Tarvisium in Serie B, made his debut for Treviso playing against Connacht in the PRO12 in November 2012. He made several appearances for Italy A.

Played for Italy U20 in every game in the 2012 and 2013 Six Nations tournaments, skippering the team against Ireland that March.

Esposito made his test debut on the right-wing against Wales in Cardiff in round 1, 2014, with his only four appearances in the Championship being that season.

Esposito was named in the 2019 Six Nations squad having had 7 previous 6 Nations appearances scoring 10 points.

As of December 2019, he has made 70 appearances for Benetton and has scored 75 points with his 15 points.