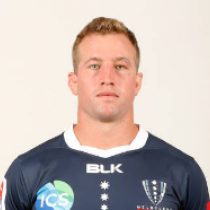 Originally a member of the Rugby League family, Cottrell made the conversion to Union after being spotted by the Western Force playing for the Brisbane Bulldogs in the NRL in 2012.

He made his debut in week 1 of the 2012 Super Rugby season against the Brumbies. Angus' father, Nev, captained the Wallabies at hooker in two tests against the British and Irish Lions.

He was named in the Rebels squad for the 2018 Super Rugby season.

Cottrell made 14 appearances for the Rebels in his debut season with the side and was appointed the Melbourne Rising captain for 2018.

He was called up to the Wallabies squad ahead of the final two rounds of the Rugby Championship, however, he was unable to secure an international debut.

2019 saw Cottrell being selected in the Barbarians squad for the side's Autumn tour against Brazil, Fiji and Wales.

The flanker represented the Rebels 14 times in 2019, averaging 62 minutes a game, registering one try against the Sunwolves in Round 15.