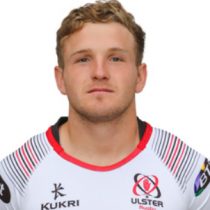 Curtis was selected for the Sharks U18s team at the famous Craven Week in 2016, a competition in which the best schoolboys in South Africa go head-to-head as part of their provincial sides.

Schooled at the prestigious Hilton College in South Africa, he is a member of Ulster’s academy after moving to Ireland to pursue his dream of playing international rugby.

Curtis was named in Peter Malone's U20 squad for the 2017 World Rugby U-20 Championship in Georgia, where he played a key role at inside centre.

The former Irish U20 International is as comfortable playing fly-half as he is playing centre, and in August 2018, the versatile Ulster Academy player upgraded to a development contract for the 2018/19 season.

His impressive form in that season led to a senior contract that will keep him at Kingspan Stadium until at least 2021.

As of May 2020, he has made 13 appearances for the Irish province and has scored 5 points.